Three Atlantic High School Seniors Will Share The Robert Mannheimer Youth Advocacy Award For Taking a Courageous Stand, Editorializing Logically And Eloquently in the On-Line Student Newspaper About the District's Lack of Transparancy After an Atlantic Teacher Tweeted an Inappropriate Photo of a Hand Over a Breast.

Meghan Plambeck, Lillie Zablocki, and Sierra Smith of the Atlantic school’s online newspaper, the AHSNeedle.com, “were called on to use their writing skill and thinking power to research and write an editorial about a tense situation in our school district,” said the person who nominated them, Allison Berryhill, Atlantic high English teacher and journalism advisor. “The topic was a volatile one: A questionable Tweet had been posted from a beloved teacher’s account. The students and community wanted explanation. The administration was tight-lipped.” 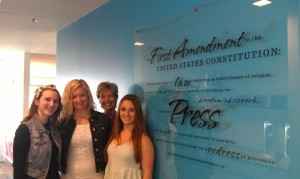 The students rightly called out the administration, saying that it was holding students and teachers to different standards in sharing and using questionable social media. In a jointly authored editorial last September, they wrote, “It is important that authorities maintain transparency in how they are addressing the situation, especially in a case where the issue is widespread public knowledge.”

Berryhill said in her nomination that “the maturity of the writing and clarity of purpose resulted in an editorial that was praised by the community, including teachers and even school board members. As local and state news outlets picked up the story, the district superintendent ultimately provided the community with at least acknowledgement of the situation and assurance that the matter had been addressed.”

ACLU of Iowa Executive Director Ben Stone said he was pleased that the award recognizes three young journalists upholding basic First Amendment principles of free speech and expression. The ability to question authority is a cornerstone of democracy.

Stone said it’s especially appropriate that the ACLU of Iowa give the award to students since it has a long history of defending student First Amendment rights, including the landmark “black armband” case of Tinker v. the Des Moines Schools in front of the U.S. Supreme Court.

The three students will be formally named the winners of the Mannheimer Award at the ACLU of Iowa’s annual dinner in Iowa City on Saturday, May 3.

The runner-up in the contest is a Polk County student who prefers to remain unnamed for safety reasons. She established a non-profit 501C3 non-profit called Teens Against Human Trafficking, using digital and social media for education and advocacy, presenting state and local workshops, and piloting an active anti-trafficking group at her high school.

About The Mannheimer Award

The Robert Mannheimer Youth Advocacy Award was established by the family of the late Des  Moines attorney who supported the ACLU of Iowa for more than 50 years as a cooperating attorney, board member, and donor. It is given annually to a young Iowan aged 14 to 19 who has demonstrated a passion and advocacy for civil liberties. (Click here for more details.)